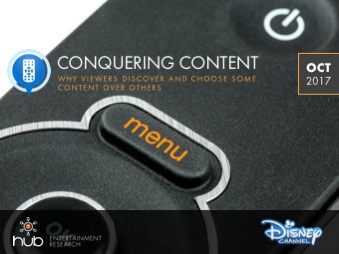 Wave 5 of our deep dive into how consumers discover new shows and choose which ones to watch.

So many shows, so little time. Since 2012, the number of original scripted shows introduced each year has been increasing at a dizzying pace. And that growth shows no signs of slowing down. FX research predicts an unprecedented 534 shows in 2017, up from a previous high of 455 last year.

And that doesn’t yet count the new shows that will be coming out of Apple’s massive billion-dollar investment in developing its own original series.

In past waves of our Conquering Content study, we’ve found that most consumers are happy with this embarrassment of riches, saying they spend more of their time than ever before watching shows they “really like”.

But is it possible to have too much of a good thing? For example, we’ve also found that significant proportions of viewers feel there is so much content available that it’s “hard to know where to start”. And FX’s John Landgraf predicts that the “glut” of new content will ultimately result in “a race to the bottom in endless volumes of mediocrity.”

It’s a classic case of an unstoppable force (more and more content, from an ever-increasing number of sources) meeting an immovable object (no change in consumers’ disposable time for entertainment).

That marketplace reality makes it more important than ever to understand: (1) how consumers decide what to view, and (2) how to make sure content cuts through the clutter, to ensure that shows even have a chance to be considered.

Online survey with 2,214 U.S. consumers age 16-74 who have broadband access at home and watch a minimum of 5 hours of TV per week.